Enough With The Scary Clown Shows 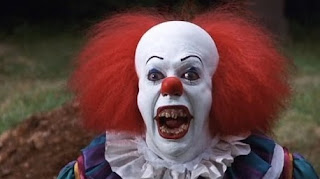 It's past time our President dictated some rules for behavior at these WuFlu press briefings.  A number of enemies of our republic are taking advantage of the situation to the detriment of our country and President Trump personally.  The Alinskyite clown show of yelling reporters diminishes the Office of the President at home and our nation abroad.  It also heightens fear among the vulnerable and ill informed in our country.

President Trump is a veritable war time Commander in Chief.  However much the delusional 'reporters' invited to participate may personally detest him they must reflect due respect for the office he fills.  Many are intentionally performing 'street theater'  to ensure there's a sense of confusion in the White House.  Because he was a fellow traveler Obama didn't have to endure it - however incompetent and treasonous he was.  President Trump shouldn't accept it, not for a minute more.  These cretins must be ejected permanently.  Doing so will facilitate timely and accurate communications instead of, at best, providing the WuFlu shut-in substitute for WWF.
Posted by The Gaffer at 11:41 AM

Email ThisBlogThis!Share to TwitterShare to FacebookShare to Pinterest
Labels: BioWar