The 'Global Warming' hoax was used by marxist, America hating, teachers to scare children and frauds to shake down governments and companies.  Our very own children were essentially told their parents were killing them and destroying the world out of greed.  The obvious results of this communist brainwashing are what we see in the streets today.  Chicken chested, privileged American hating morons.  Ripe for the picking by Xi and friends.

I was never in doubt it was all a hoax.  As the saying goes 'environmentalists are like watermellons, green on t he outside, red on the inside".  This was never more true than in the apparent Master of Ceremonies of the first Earth Day event in Fairmount Park, Ira Einhorn. I knew the family and attended school with his brother.  Deeply dedicated communists.  Knowing his conspicious involvement I refused to go - the only student in the entire school to do so.  Ira 'Unicorn Killer' Einhorn's subsequent murder and composting of his girl friend came as little surprise to me.  Amusingly the Wiki page on the event is routinely edited to minimize Einhorn's involvement.  This picture from the front page of the leading newspaper accurately illustrates his role. 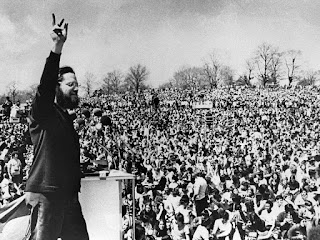 Folks - it was ALWAYS a hoax.

Maurice Strong, who organized the first U.N. Earth Climate Summit (1992) in Rio de Janeiro, Brazil revealed the real goal: “We may get to the point where the only way of saving the world will be for industrialized civilization to collapse.”

U.S. Senator Timothy Wirth (D-CO), then representing the Clinton-Gore administration as U.S undersecretary of state for global issues, addressing the same Rio Climate Summit audience, agreed: “We have got to ride the global warming issue. Even if the theory of global warming is wrong, we will be doing the right thing in terms of economic policy and environmental policy.”

Deputy Assistant of State Richard Benedick, who then headed the policy divisions of the U.S. State Department said: “A global warming treaty [Kyoto] must be implemented even if there is no scientific evidence to back the [enhanced] greenhouse effect.”

Former Canadian Minister of the Environment, told editors and reporters of the Calgary Herald: “No matter if the science of global warming is all phony…climate change [provides] the greatest opportunity to bring about justice and equality in the world.”

Mikhail Gorbachev emphasized the importance of using climate alarmism to advance socialist Marxist objectives: “The threat of environmental crisis will be the international disaster key to unlock the New World Order.”

Stephen Schneider, who authored The Genesis Strategy, a 1976 book warning that global cooling risks posed a threat to humanity, later changed that view 180 degrees, serving as a lead author for important parts of three sequential IPCC reports. In a quotation published in Discover, he said: “On the one hand, as scientists we are ethically bound to the scientific method, on the other hand, we are not just scientists, but human beings as well. And like most people, we’d like to see the world a better place, which in this context translates into our working to reduce the risk of potentially disastrous climatic change. To do that, we need to get some broad-based support, to capture the public’s imagination. That, of course, entails getting loads of media coverage. So we have to offer up scary scenarios, make simplified, dramatic statements, and make little mention of the doubts we might have. Each of us has to decide what the right balance is between being effective and being honest.”

The 'science' of man caused global warming disasters was ALWAYS specious.  Here our leading engineer debunks the theory as cherry picked nonsense.  (An excellent primer on the subject by a real environmentalist)

Now, probably too late to ever deprogram the idiot masses, the purpetrators are beginning to confess.

One can only wonder - how long it will take before the agents that drove the devastation of our economy over WuFlu will confess to the truth?

Email ThisBlogThis!Share to TwitterShare to FacebookShare to Pinterest
Labels: CPUSA