The answer to a question often asked by marxists shills

The left has long loved their AKs, even using them on their banners.  Here's a commie (uncharacteristically with an AR)  vocalizing direct threats during a 'protest'. 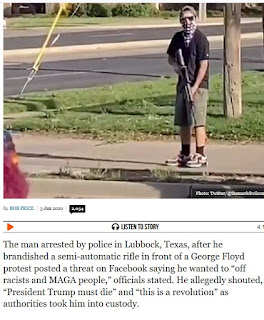 They intend violence and death to promote the destruction of our republic.  The Bernie Bro with his SKS (yup, they do like combloc guns when they can get them) nearly killed several Republican congressional representatives.   He was not the outlier.
https://en.wikipedia.org/wiki/2017_Congressional_baseball_shooting
The threat is present and real.  Currently the left in the street is a dangerous, violent mob that is driven by a well funded (at least in part by Soros), organized, international terrorist group ANTIFA. https://www.youtube.com/watch?v=RmNz2jGzsDA
Posted by The Gaffer at 2:09 PM